Can't decide between Vietnamese, Japanese, Chinese, and Thai food? You don't need to, here! Four pages of densely printed menu pretty much cover everything. It's not actually "fusion" since the cuisines aren't being combined in new ways, but they are all represented, and are done well, and with fresh ingredients. The dining area is bright and cheery, and the service is friendly.

Great spot for Thai food! We loved everything we had, and the decor is great, with the interior imported from an old school house in Thailand.

The Panang Curry is the best I have had anywhere, with incredibly complex flavors and just the right spiciness (at level 3 of 5). We had it with shrimp, but it would be great vegetarian or with chicken, too.

Black Pepper Fried Rice was also excellent. It came with its own protein on the side (chicken in our case) but it also made a great base for the panang curry.

The Yum Neau grilled flat iron steak was a great Thai salad, with all the vegetables served in a tasting style so you could make your own combination. Perfect char on the tender steak.

I have always loved this space in all its former incarnations, and I have always loved Tabla on Grand National, which has also undergone a lovely transformation during the many years I've been going. So to have the two combined in this new spot is a dream come true.

This is in one of those amazing little cubby holes off of Park Avenue, so you can have the fantasy of dining "outdoors" in air-conditioned luxury under the spreading (convincing but plastic) leaves of a banyon tree. Or venture inside, for posh surroundings.

The Indian food here is as good as any you'll get in Central Florida. I'm a particular fan of the Korma. Don't be put off by the fact that they also offer Thai and Chinese cuisine–it makes it a great place to go with cautious eaters. 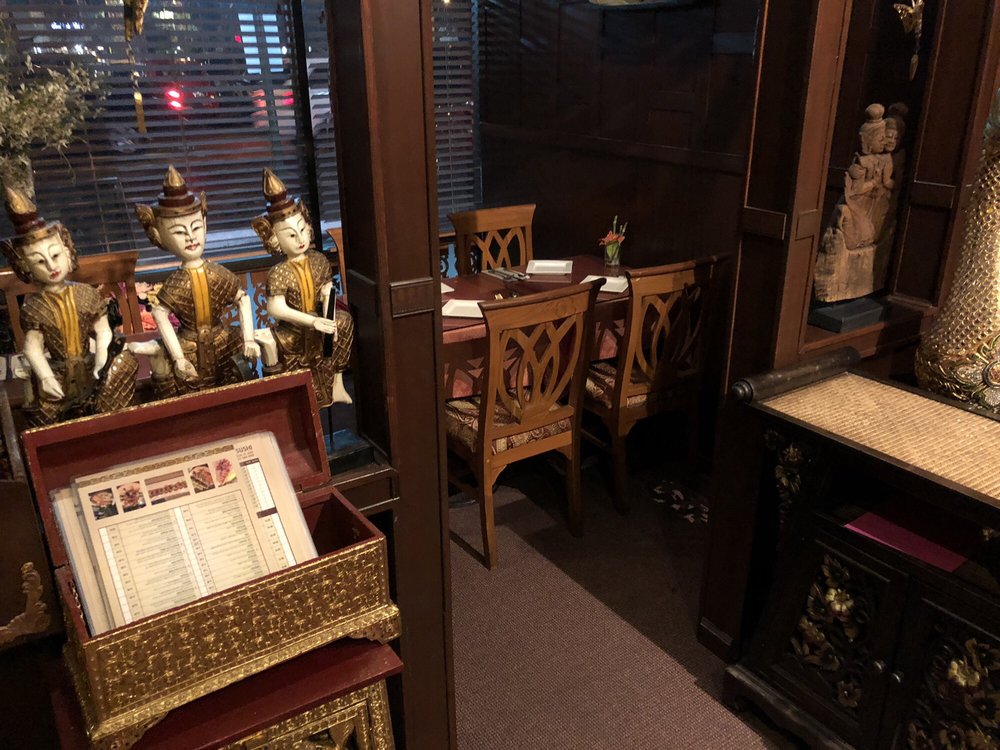 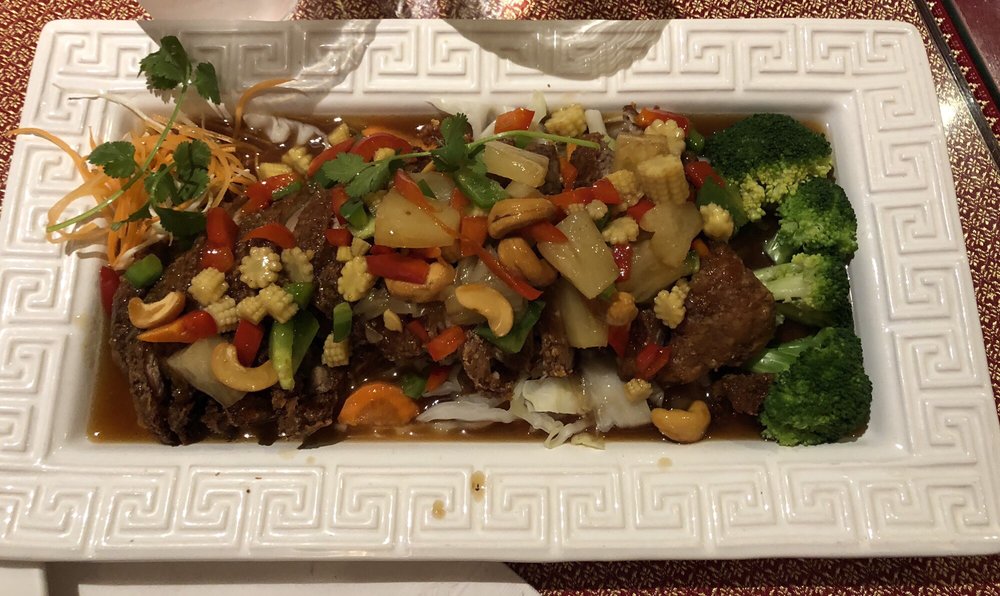 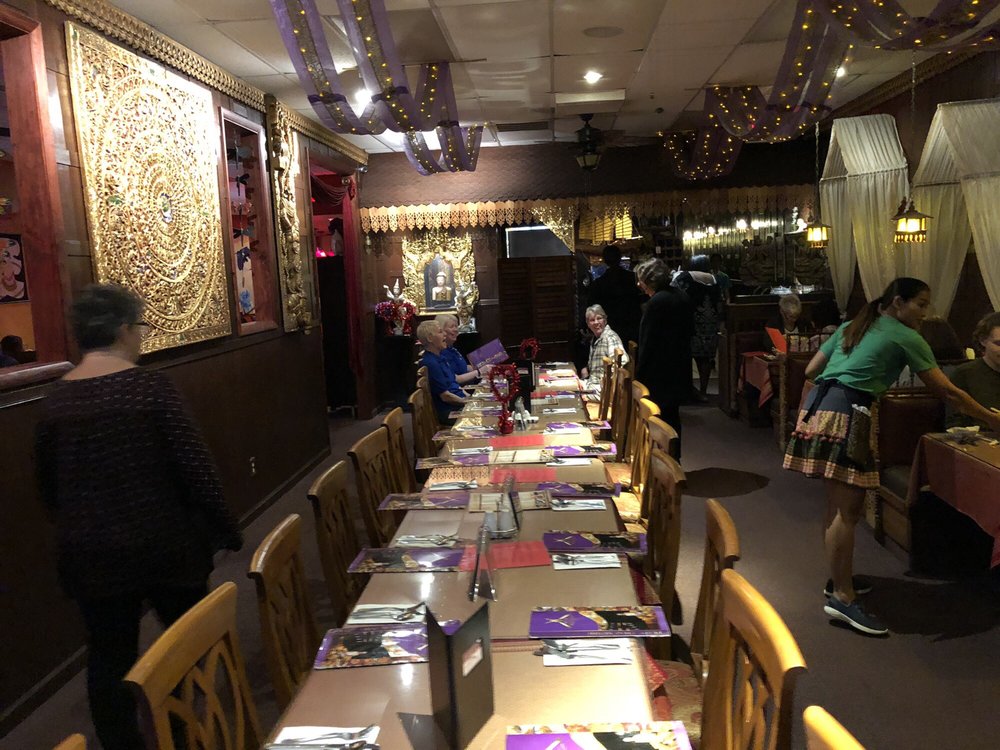 Terrific Thai food is served in this charming restaurant that’s been in business for 17 years. It is definitely a family run operation, from the gracious hostess to the chef. The restaurant is named after the owners’s daughter, Ploy, who has grown up with it.

All of the Thai favorites are here. The appetizers, while fried, aren’t to oily, and I’m a particular fan of the Talay. 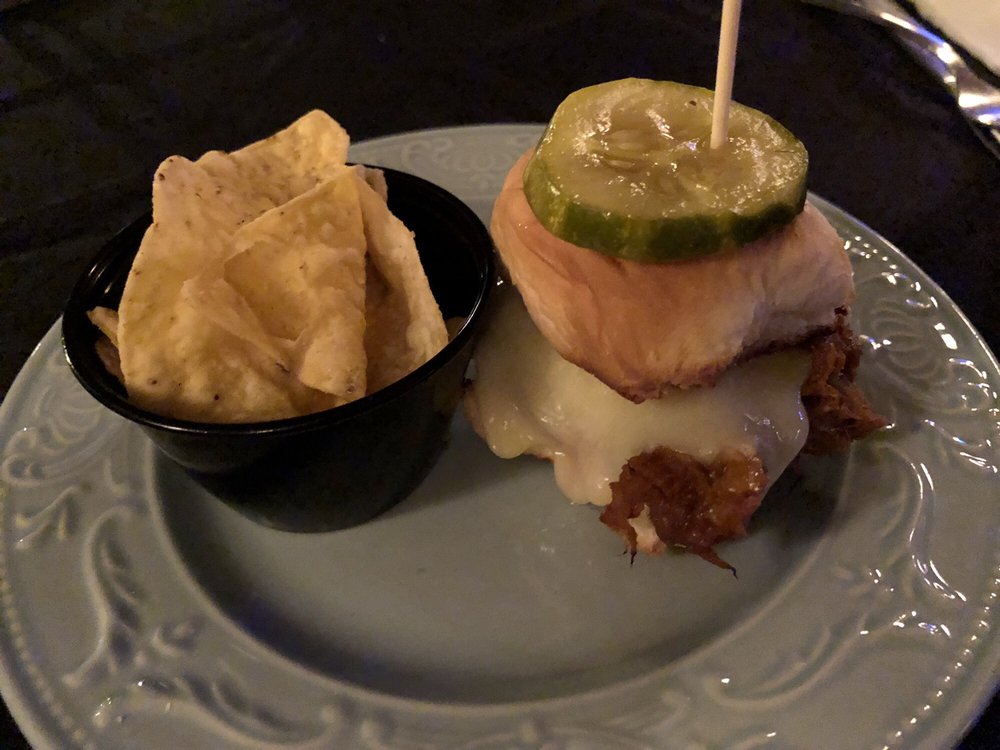 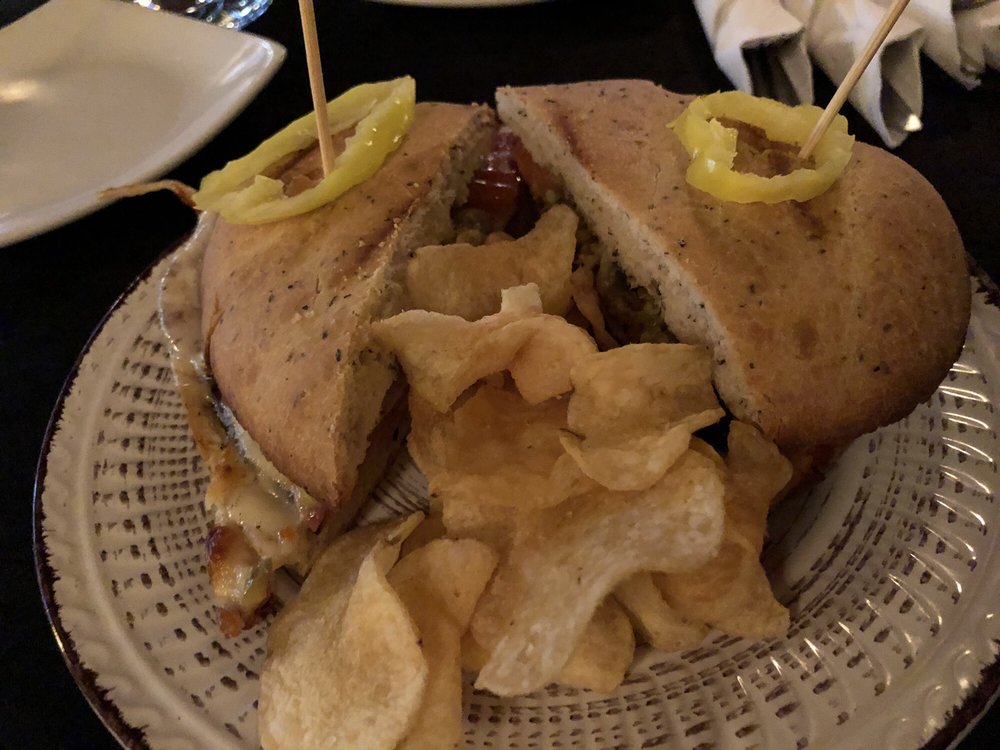 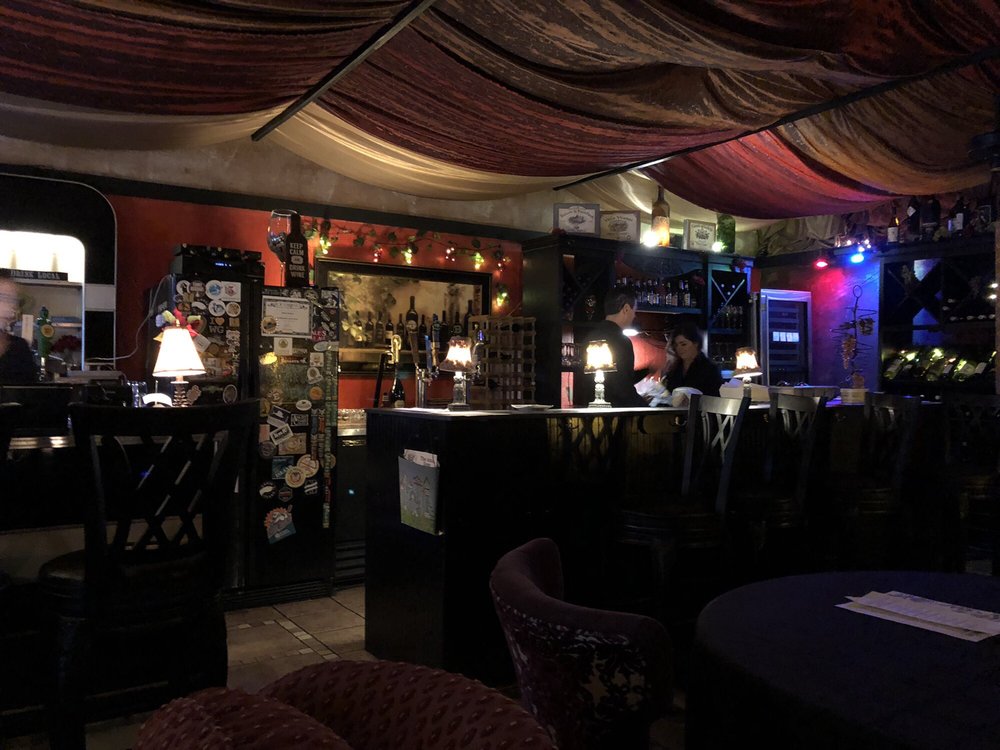 Now under the new ownership of Laurie and Kevin Tarter of the Chef’s Table and Tasting Room across the street, the Attic Door has reached its full potential as a chill place to hang out and enjoy good food, wines, beer and live music.

Long-time fans will find that all of the Attic Door’s best features have been retained, but the food is now an order of magnitude better, the wine list more interesting, the beers vastly more interesting, and the seating more comfortable, and better suited to enjoying the food while listening to the excellent live music.

The service has the friendly professionalism you would expect from these experienced owners. There’s a passion here to make everything just right for guests.

There will also be an afternoon tea some days. Hearing about the research that has already gone into selecting the teas and scone recipes makes me excited to experience another unique offering.

The attic Door is definitely most chill place to hang out in Winter Garden. 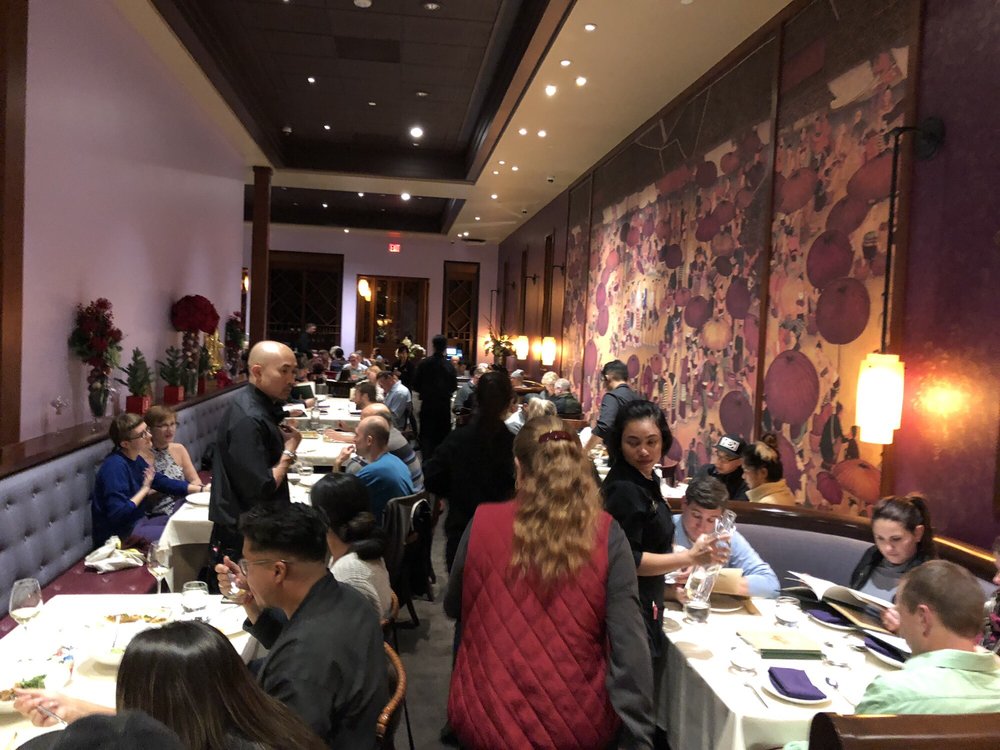 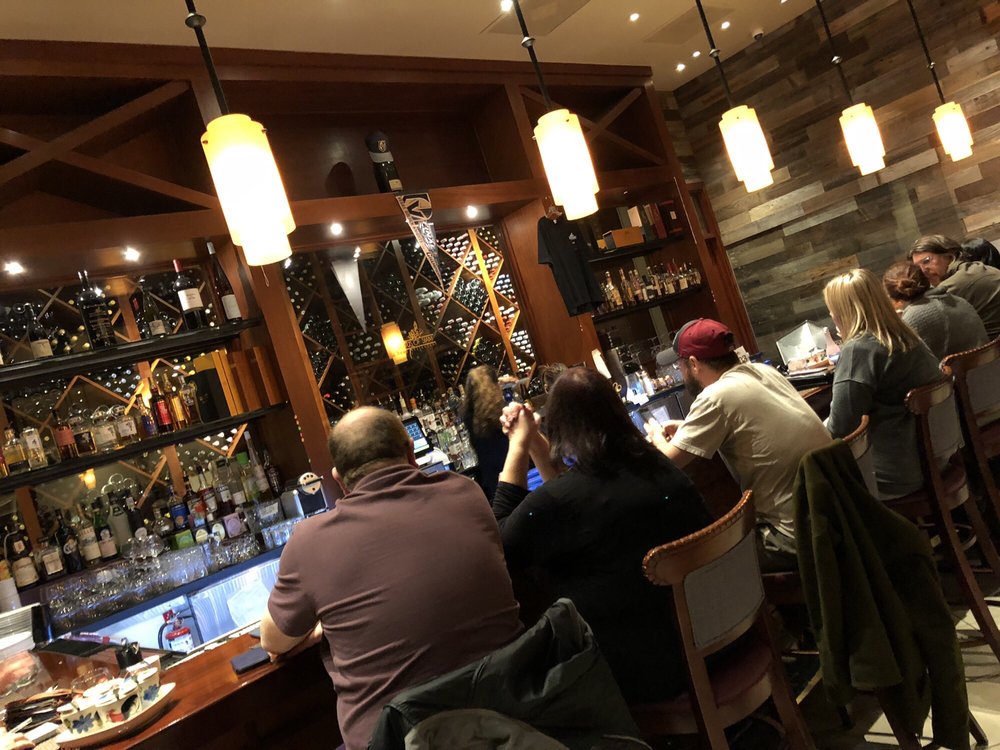 As the awards attest, Lotus of Siam serves some of the best Thai food in the country. This new location is a gorgeous building, and allows them to serve many more people.

As is often the case, with the growth come issues. We’ve always had amazing service at the old location. To describe the service at this new location as disjointed would be giving it too much credit. The fundamental problem is that you don’t have a server. Instead, a whole team of people randomly drops by; two people took our orders, two others took orders for wine, the food was delivered by runners, water refilled by others, and wine… well, the wine was another matter all together.

Lotus of Siam has a great wine list. I didn’t see anyone else in the vast space having a bottle, so it may simply be they’ve forgotten how to serve it. We ordered two bottles and forty minutes later(!) finally were advised they were out of both. We ordered an alternate for one of them, and accepted a recommendation for the other. fifteen minutes later the recommendation finally showed up. The other bottle? Missing in action. We finally gave up and cancelled it after all the food had been served.

And the one bottle we did get ended up being self-serve. We had to get up and get it from the ice bucket every time we needed a refill. 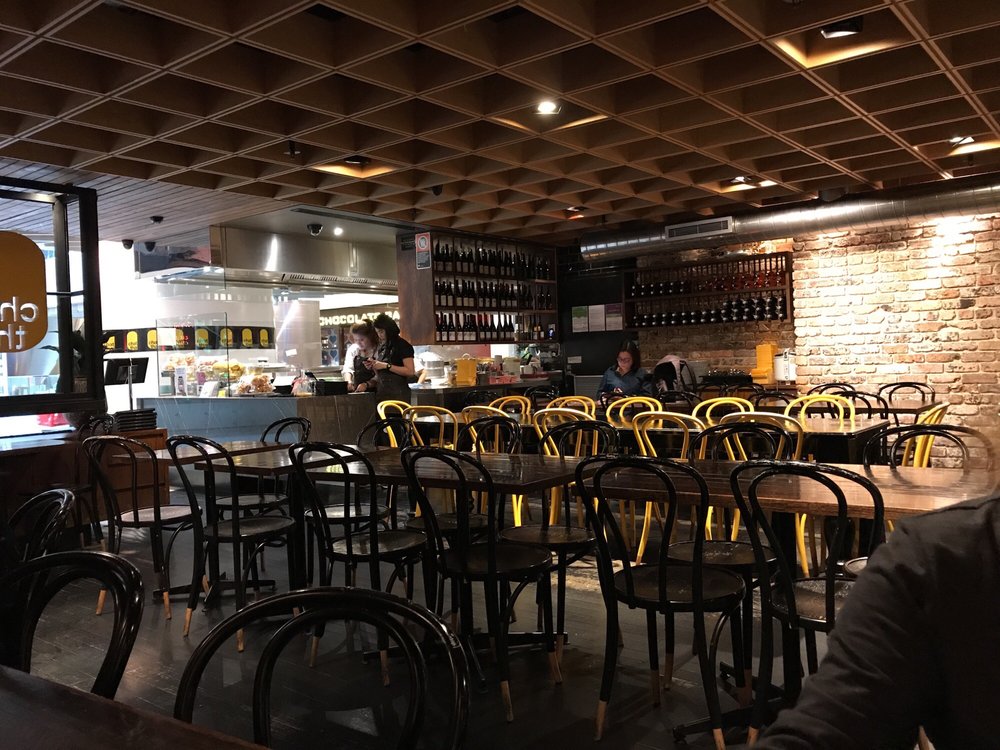 I absolutely love this place, and make multiple trips here whenever I visit Sydney. The stirfry dishes are not at all oily, and the noodle dishes are not overcooked. The menu is vast, and it’s not as if they are combining just a few ingredients in many ways. There are many many unique flavors. Wonderful place. 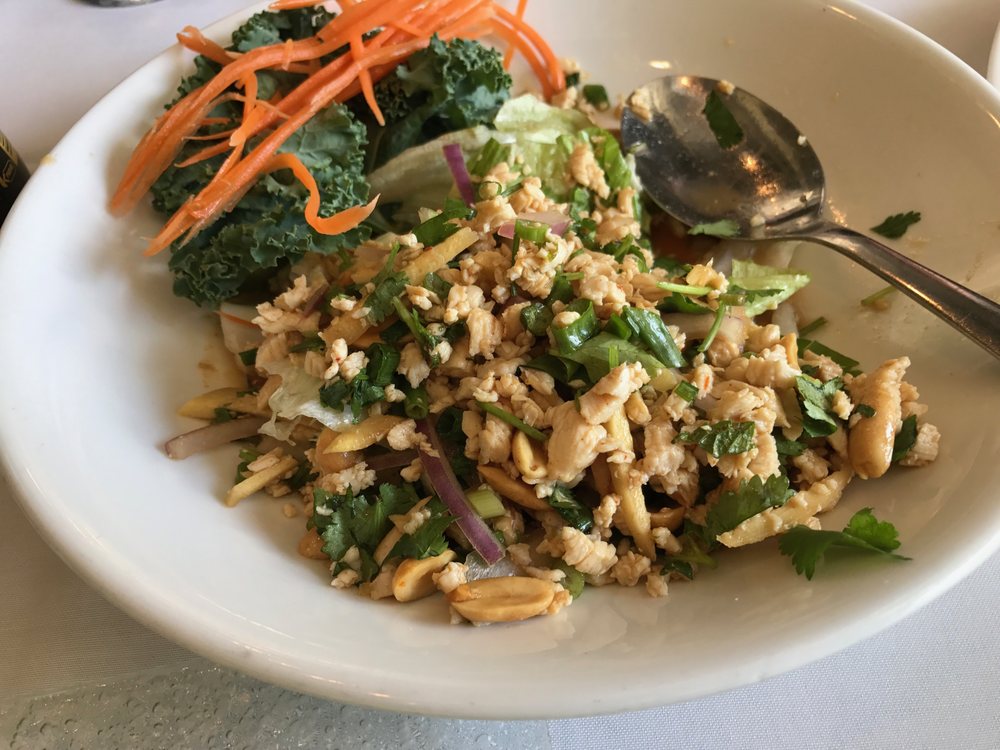 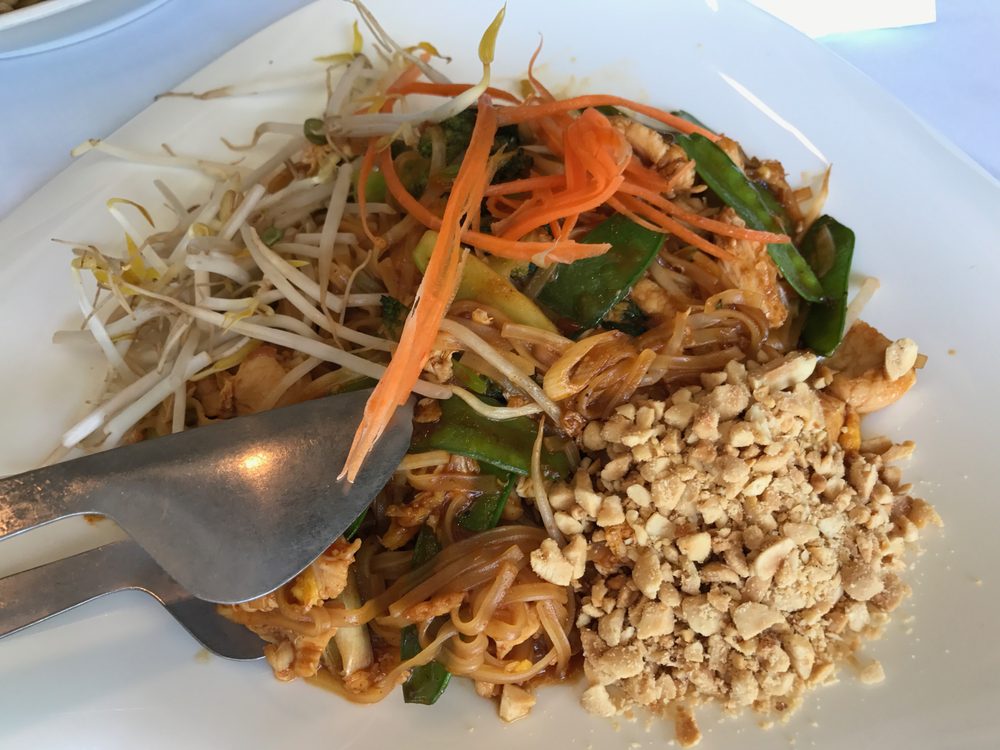 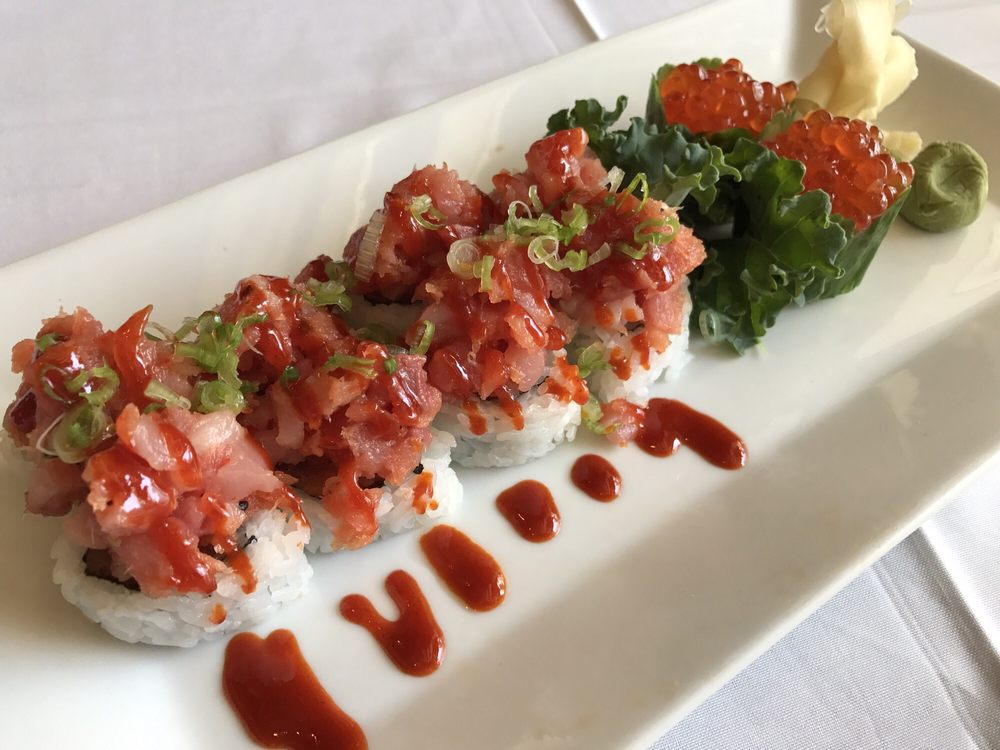 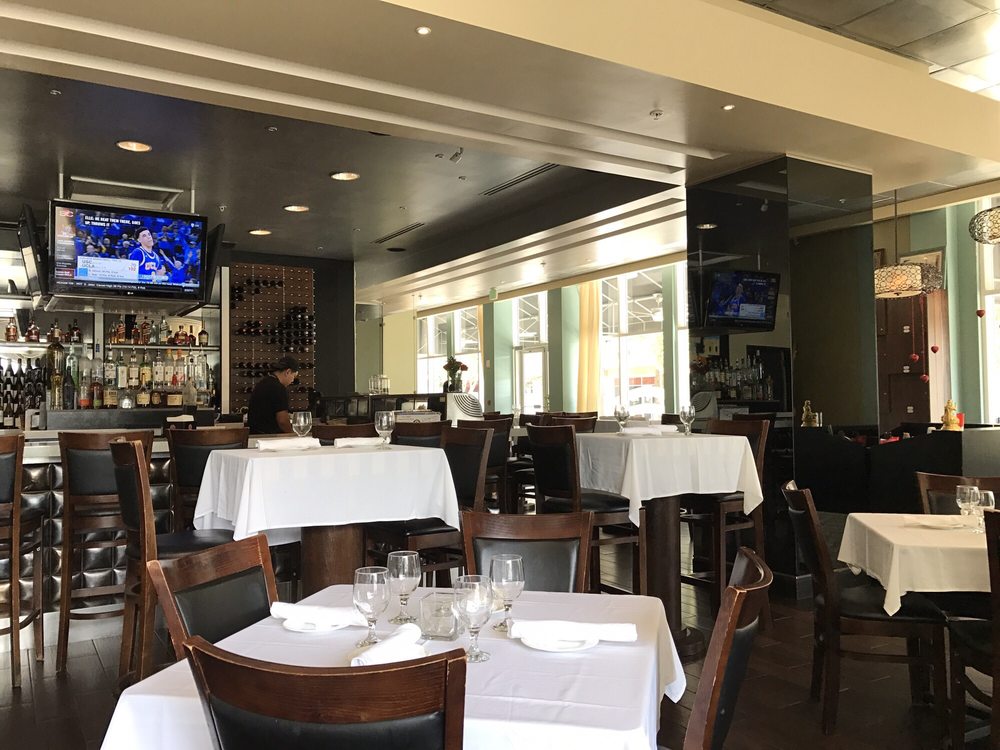 Oudom is the latest occupant of a space that has been a revolving door for restaurants, and I hope it does better than its predecessors, because it is a much better restaurant.

We started with their Dynamite Roll, which emphasizes sriracha rather than wassabi. It was a well-made roll with a good balance of flavors.

Pad Thai was a bit lackluster, I thought. It lacked the crispness that should have been imparted by lime juice, and I didn’t detect any egg.

The lettuce wraps were our favorite. The mixture incorporated lots of cilantro, ginger and citrus, and was fresh and very flavorful.

The space is largely unchanged from its last incarnation. It’s open and high-ceilinged, and pleasant to be in.

Our server was friendly and efficient, and the pricing is reasonable. 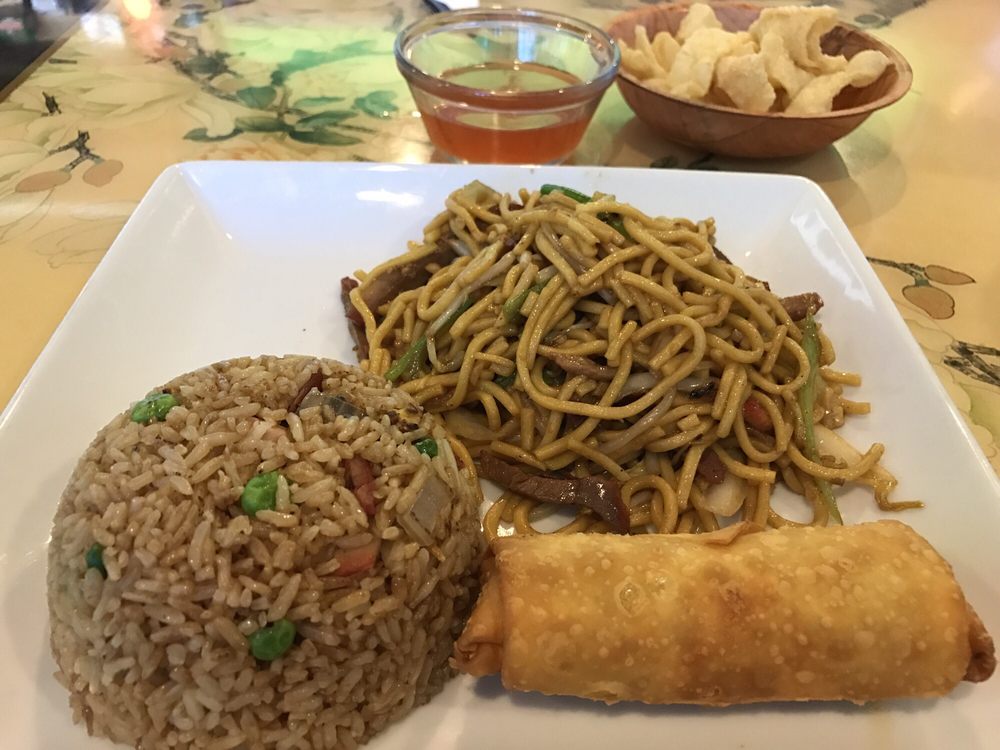 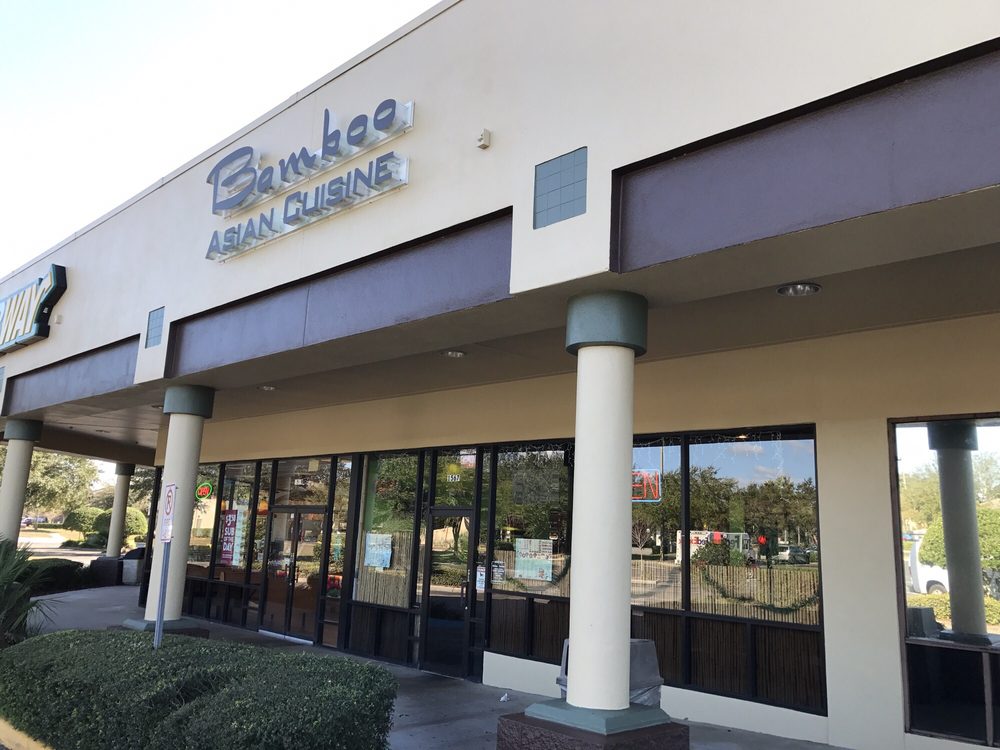 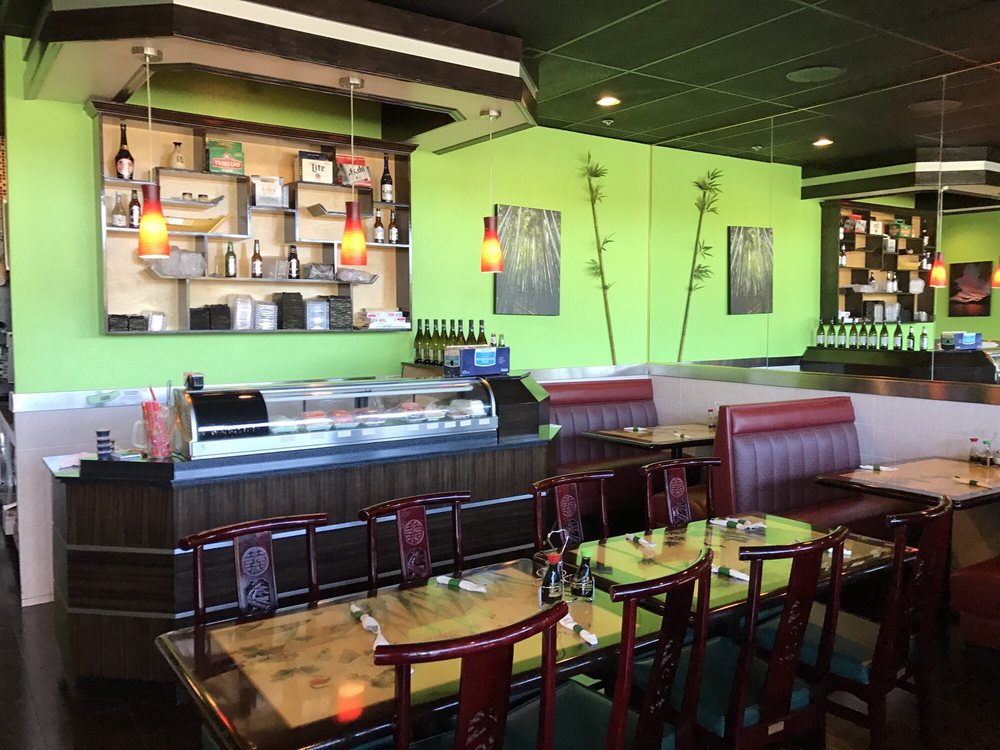 This isn’t a fusion restaurant (which would blend cuisines in one dish) but they do offer Chinese and some other Asian cuisines, particularly sushi.

I liked the three items I had at lunch: a particularly savory pork lo mein, a very interesting flavored egg roll and fluffy fried rice. Service was fast, perhaps due to the fact I was alone.

The place is bright and clean. 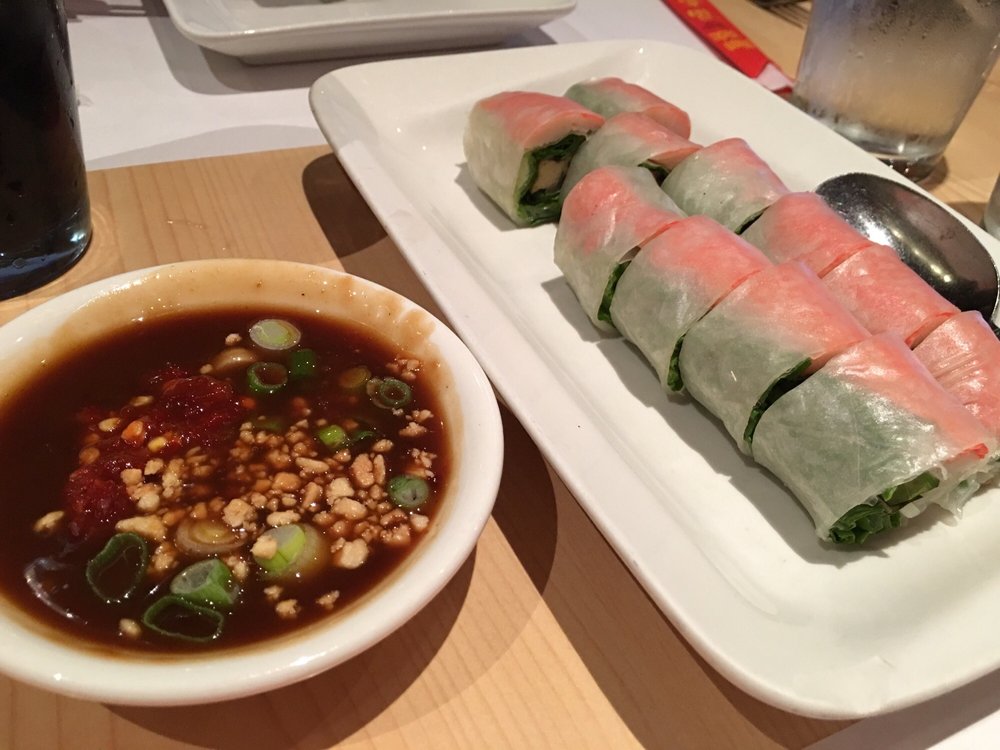 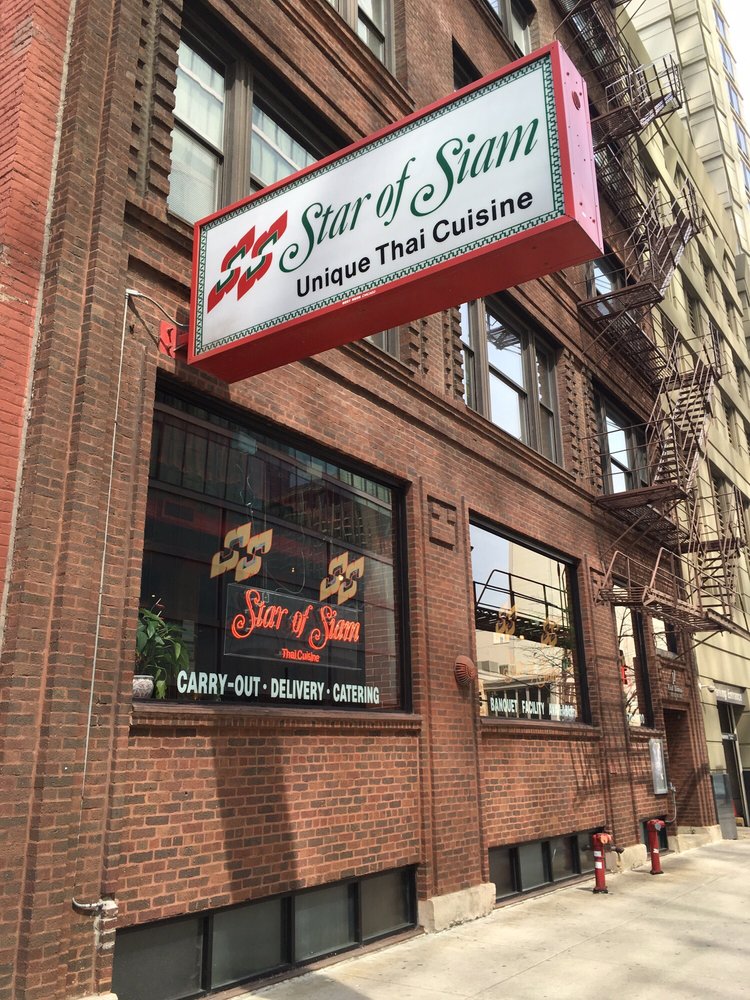 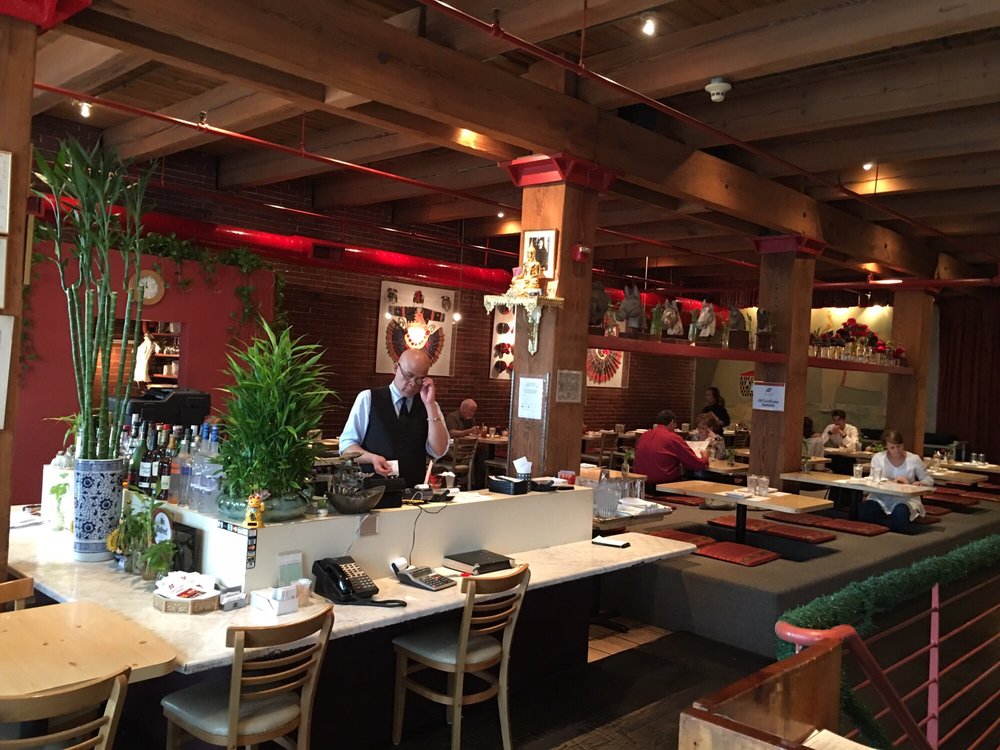 This is a satisfactory Thai restaurant. It’s not going to change your life, but if you’re in the area and have a hankering for Thai, it’s a fine choice.

Ironically enough, the best dish we had was the Vietnamese spring rolls. They had a nice combination of basil and mint, and were very fresh. It was nice that they had been cut into bite-sized pieces, and they were served with an excellent sweet and chunky peanut sauce topped with scallions and laced with Sriracha.

Massaman curry was also fine, with a nice coconut base and plenty of whole peanuts. There were lots of shrimp in the version I had, and a few chunks of potato and pineapple. No peppers, but instead cherry tomatoes, which seemed an odd choice.

The beef salad had some great flavors, but the beef was really too tough to be appealing, and almost too tough to eat.

Service was very fast and friendly, and the decor is open and interesting.